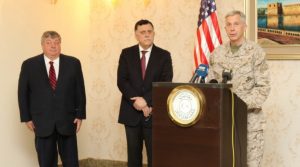 This, he said, would benefit the military, security institutions and the police. Serraj made the announcement in which he gave no details of what weapons he would seek during a rare US diplomatic/military visit to Tripoli. Marine Corps General Thomas Waldhauser, chief of the US Africa Command (AFRICOM), was in the capital with the American ambassador Peter Bodde.

It appears that the meeting may have been organised at short notice following Serraj’s brief talk on Sunday with president Donald Trump on the fringe of the American Islamic States Summit in the Saudi capital Riyadh.

Serraj thanked his two guests for their prompt response to his invitation and said their visit came at an important moment.

“It is time to alleviate the suffering of our people and end the political, economic and security crisis” he said. Admitting that it had been severe, he continued: “We have arrived at a moment of truth and we will not tolerate troublemakers and destabilisers who compromise our people’s aspirations for achieving reconciliation and accord, particularly those who are mobilising to threaten the security of the capital, Tripoli.”

He did not spell out to whom he was referring but said that they had lost their minds. However, he warned that the opportunity for them to change would not last long.

Waldhauser said that AFRICOM “continues to collaborate with GNA security officials on ways we can support those forces charged with securing Tripoli”.

Serraj thanked the US for its help in defeating the so-called Islamic State (IS) and said he looked forward to further cooperation in the shared vision of defeating terrorism.

Waldhauser described their meeting as another positive step in the continued process of restoring security in Tripoli and across Libya so that the Government of National Accord (GNA) could continue the stabilisation process.

“We commend prime minister Serraj for taking important steps in the process of restoring unified governance to the country,” he said.

“We urge all parties in Libya to work with the GNA and focus on eliminating the threat posed by ISIS (IS) in Libya.”