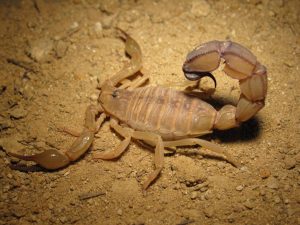 A competition to find innovative small business projects in Libya has culminated with the announcement of the three winners in Tunis.

Sponsored by the EU, Libyan Enterprise, France Expertise, Libyana, the Oil and Gas Development Company and the National Programme for Small and Medium-sized Enterprises, and organised by the Support to Libya for Economic Integration, Diversification and Sustainable Employment (SLEIDSE), the competition attracted some 800 proposals when it kicked off earlier this year.

The organisers’ criteria for the best project says it had to be innovative, ground-breaking and based on good teamwork.

The first prize of LD 15,000 went to the ‘Sinbad’ project which aims to teach the basics of entrepreneurship and project management in a simplified and interactive manner.

“Sinbad is a vision that started with three young Libyans who are passionate about entrepreneurship, education and a sense of social responsibility,” said Marwan Al-Abed, from Tripoli, one of the three people behind the idea.

“Everything that we do comes from our interest in improving people’s lives and Sinbad is merely a tool to do just that by spreading the entrepreneurial culture within our young generation, he told the Libya Herald.

“We also have a sense of belonging to Arabic culture via ‘Sinbad’, the fictional Arabic sailor, adventurer, risk taker and a businessman of sorts.”

Team members, Shaker Algubtan and Mahmoud Abugrin, in addition to Marwan, are working hard to release the first module by the beginning of 2018.

In second place, winning LD 10,000, was Asem Ali from Zawia with a proposal to set up an electricity-generating plant using recycled waste.

“The idea came because of the clear accumulation of waste dumping, which is a prime reason for pollution,” Asem said.

He believes the project will be economically viable as well as socially and environmentally responisble. However, he expects to face difficulties in funding the project.

The final project, in third-place with a prize of LD 5,000 proposes extracting venom of scorpions for use in the pharmaceuticals industry.

Hussein Kafu, from the Jebel Nafusa, is the brains behind the operation.

“Many of my friends from south have been stung by scorpions and are in need of an antidote.”

“I found out that we don’t have in Libya such a serum at all,” he explained.

The awards were presented by the head of the EU mission to Libya, Bettina Muscheidt. 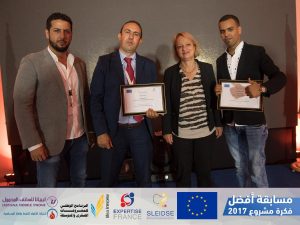 The three winners with EU ambassador to Libya (Photo: SLEIDSE)