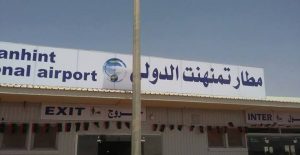 He said the Misratan 13th Brigade, formerly the Third Force, withdrew from Tamenhint and headed north to Jufra. There are reports that some Islamist elements that were with them have escaped and are said to be operating south of Sirte.

The spokesman of the LNA’s 12th Brigade, Mohamed Lifrais, told the Libya Herald his unit had captured a group of Chadian fighters. The advance on Tamenhint was supported by the LNA’s 116th Brigade.

Misrata’s 13th Brigade and its allies, who include the Islamist Benghazi Defence Brigades (BDB), are alleged to have made frequent use of Chadian mercenaries.

The LNA’s success in taking over Tamenhint comes after its humiliating defeat at the neighbouring Brak Al-Shatti airbase on 18 May when the Misratans and BDB forces met minimal resistance as they attacked. In the subsequent massacre some 141 LNA soldiers and civilians were executed.

Tribal figures in the south last week gave the 13th Brigade 72 hours to vacate the region. Some tribal militias have been supporting the LNA.

The Misratan withdrawal from Tamenhint was preceded by their quitting the Sharara oil field, which was handed over earlier this week to a Tuareg militia led by Ali Kana. Locals report that the transfer was peaceful.

The Misratans took Sharara in late 2014 with the help of Tuareg militias, forcing out the Tebu and Zintani Petroleum Facilties Guards who had been protecting it. Since then production has been erratic because of the frequent disruption of pipelines taking oil and gas to the coast.