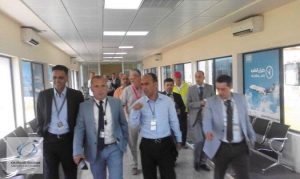 A technical team from Turkish Airlines conducted an inspection visit to Mitiga airport on Tuesday, Libya’s Airports Authority reports. The visit comes as part of efforts by the Turkish airliner to restart flights from Istanbul to Tripoli.

The inspection visit included a review of the security situation at the airport and any further steps needed to improve security procedures while Turkish airliner craft are at Mitiga.

It will be recalled that while Libyan state-owned and privately-owned airliners are currently flying scheduled flights to Tunis, Istanbul. Alexandria, Amman and Khartoum, they are still banned from entering EU airspace. The same applies for EU carriers into Libya.

Although the EU has banned flights between Libya and the EU, this does not cover charters. Prior to 2014, Afriqiyah and Libyan Airlines got around this by wet-leasing aircraft registered elsewhere.  Afriqiyah now has two Airbus A320s which are registered within the EU, in Lithuania.

Earlier this week, as part of Mitiga airport’s efforts to improve its standards to those required by the EU, Italian company Techno Sky delivered a new mobile air traffic control tower in arrived in Tripoli port from Italy to be installed at Mitiga.

The tower is one of two that Techno Sky agreed to install at the airport in a multi-million euro deal signed in Tripoli at the end of March. A new fixed control tower is still to be built. Together they will significantly increase Mitiga’s capabilities. The March contract, due to be completed by the end of the year also includes training.