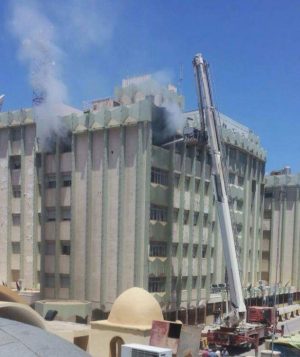 The Mellitah Oil & Gas Company’s headquarters in Tripoli were hit in the clashes. (Photo: Social media)

Heavy clashes erupted in Tripoli today between militias loyal to the former General National Congress (GNC) and the Presidency Council (PC). By late afternoon at least 21 of the latter’s troops were said to have been killed and 29 injured.

Casualties on the GNC side were unknown.

Fighting started when the GNC’s main militia commander, Salah Badi, launched an attack on the Abu Sleem Central Security Force, headed by Ghneiwa (Abdul Ghani Al-Kikli) in an attempt to recapture the Rixos Hotel complex and the nearby Camp 77. The latter is next to the former Qaddafi compound in the capital’s Bab Al-Aziziya area and was Badi’s headquarters until he lost it in the fighting earlier this year that eventually saw the GNC forces crushed and pushed out of the capital.

However, an attempt to recapture the lost ground was long expected and Badi’s movement, Fakhr Libya (“Pride of Libya” – فخر ليبيا), first made a move to try and reassert itself a fortnight ago. He claims it is necessary to preserve the 17 February Revolution.

Today, he also attacked the nearby Salahaddin and Khala Furjan districts as well as the Airport Road before moving onto the Abu Sleem, Hadba and Hay Demashque areas.

Tanks and heavy artillery were used, with stray bullets hitting mosques and houses, including the Elbadri Mosque on way to Salahaddin and the home of Libya Herald’s managing editor. Central Tripoli’s Dahra area was also hit by shelling, with the Mellitah Oil and Gas headquarters, taking a direct hit.

For his part, Ghneiwa was supported by a number of other pro-PC militias.

According to Pro-PC militia commander Hashm Bishr, the Tripoli Revolutionaries Brigade of Hauthem Tajouri lost nine ment with another 22 injured. Another 12 died and seven were injured from the Abu Sleem Central Security Force. The 155 Brigade and Criminal Intelligence Board both lost one each.

A statement by Ghneiwa’s group called on residents to stay indoors. The Red Crescent also put on an emergency number for them to call if necessary.

Badi and his men, said Ghneiwa, were intent on controlling the capital.

“Some gangs have taken positions in Khala Furjan, Airport Road and attacked Abu Sleem this morning, attempting to occupy it,” he said during the day. This had resulted in five casualties.

Loud explosions that rattled the windows of home were heard across the city with unconfirmed reports that civilians were among were killed and injured. British Ambassador Peter Millett, who is in Tripoli, reporting artillery fire to the south.

State Council member Belgassem Igzeit, who like Badi is from Misrata, demanded the PC do more to protect civilians.

For its part, the PC accused Khalifa Ghwell and Badi of committing “heinous acts” against the civilian population. The two were criminals who did not care about civilian lives lost.

“The shelling was their Ramadan gift for the citizens,” a statement read.

Calling on residents to give whatever support was necessary to those who were fighting the “rogue outlawed group”, the PC also warned that the punishment for anyone who supported it would be “severe”. It also said that it was in contact with other countries and the UN to study political options as well.

The House of Representatives also called for an immediate ceasefire and the withdrawal of all militias from Tripoli.

UN envoy Martin Kobler said he was following the situation with grave concern and insisted “political aims must not be pursued through violence. Civilians must be protected”.

An UNSMIL statement reiterated that the PC remained the “sole legitimate executive authority in Libya”.