When Dr Hani Shennib, chairman of the National Council on US-Libya Relations (NCUSLR), opened the “New Vision, Hope and Opportunities” conference the organisation co-hosted last Wednesday with the National Council on US-Arab Relations (NCUSAR), he quoted Albert Einstein’s adage, “Problems cannot be solved by the same level of thinking that created them” and observed that conference attendees and panelists were present in the common spirit of making Libya a better place to live. With this article the Libya Herald is launching a brief series highlighting how panelists applied their expertise and elevated thinking to solving Libya’s problems.

Did Paul Sullivan anticipate the heat wave and blackouts that hit Tripoli the day after the conference?

The professor of economics at the National Defense University at Georgetown, Washington DC, who is also Affairs Fellow at NCUSAR, opened his presentation by declaring that Libya is not hopeless. Citing a “flickering glimmer of hope” he offered suggestions to address Libya’s vital need to restore secure and reliable energy systems nationwide in order for the country to move forward.

At the same time, oil and gas fields require electricity to work. The Fil (“Elephant”) field was closed for so time because it diud not have electricity.

Emphasising how vital electricity is to Libya’s ability to move forward, Sullivan confirmed what many Libyans already suspect. This Tripoli resident’s tweet yesterday: 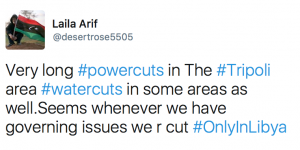 was reflected in Sullivan’s assertion that leverage resulting from control of electricity via control of infrastructure (pipelines, generating systems, switching stations, transformers, transmission lines, etc.) was being exploited for political power and military dominance.

“An eye for an eye will make us blind and blowing up power stations and pipelines will put us in the dark,” he warned, admonishing militias that sabotage infrastructure.

Blackouts mean no jobs, no hope. When people are not working, they stay at home and use more electricity. When people lose hope they do not take the necessary steps to move Libya forward or even want to think or talk about the changes required.

The reliability of energy systems is directly tied to peace and prosperity. Everything required to develop Libya’s economy is dependent on electricity. It is essential to industry, hospitals, schools, government offices, commerce, banking. When electricity is not available or reliable, this damages sectors of the economy which, in turn, increases economic and political risks.

When blackouts occur, people understandably become angry. They often then blame people and, because most people do not understand how energy systems work, they usually blame the wrong people. For example, the General Electricity Company (GECOL) blamed the latest blackouts on loss of production due to shortages of fuel and called on the NOC to boost production. The National Oil Corporation (NOC) released a statement claiming that it is providing the power plants with more gas than agreed. The uncertainty inherent in the crisis could potentially lead to spiraling of increased instability and violence.

It must be noted that in addition to the return of blackouts to Tripoli, Sebha has been enduring rolling blackouts for months, and Benghazi suffered from blackouts throughout the last three years of fighting there. Misrata too has suffered. Libyans have proven to have tremendous resilience in the face of adversity, but the effect on the national psyche cannot be underestimated.

In addition to fuel shortages and sabotage by those seeking to achieve leverage, Libya’s energy system is also subject to disruption because of people stealing electrical equipment and electricity itself. An electricity system must be balanced every moment of the day down to the nanosecond. Sullivan explained that demand had to equal supply and if it went off-balance, this caused things to start tumbling down.

According to Sullivan, Libya once had a well-connected, well-run centralised electrical grid – compared to the current four disconnected islands of electricity, which cause supply to be less reliable and cost more.

He posited if facts on the ground do not allow a centralised power system, then it may be best to focus on developing decentralised electrical systems.

There are advantages to microgrids, such as solar and wind systems, that may suit Libya better at this time and microgrids can later be modified to become part of a centralised grid. A significant advantage to microgrids is that they are less reliant upon pipelines and are less vulnerable to sabotage.

Sullivan pointed out: “If you knock out a wind vane, you just put it back up again; it does not effect the entire system.”

Unlike centralised systems that fail under attack, microgrids, combined with improved battery and other storage technologies, are able to draw on stored capacity. Compared with large, centralised systems that facilitate bribery, little systems do not. Decentralised and renewable electricity generation may be more reliable and secure at this time in Libya’s history and may enable certain areas to move forward economically, encouraging industry, education, health and other growth.

Sullivan, unsurprisingly, cited the recent installation of solar panels on hospitals in Tripoli, Benghazi and Sebha by the United Nations Development Programme (UNDP), describing them as resilient and reliable. A wind farm is also being built at Emselata, on the eastern edge of the Jebel Nafusa, south west of Khoms.

These installations have provided Libyans with the flickering glimmer of hope needed to give them confidence in taking the next step to move Libya forward.

In closing, Sullivan strongly suggested Libya incorporate two policies in future electricity generating projects. The first should be to ensure that every contract with a foreign investor for an electrical system includes training of Libyans who would be able to maintain the system. The second was to institute a demand management system whereby Libyans begin to pay for electricity to reduce energy waste, subsidies are removed, and there are funds to develop and maintain a safe and reliable national electricity system.

During the Q&A, Sullivan and Shennib also raised the possibility of market reform via a competitive electricity market, noting how monopolies historically do not listen to consumers or provide quality and reliability.