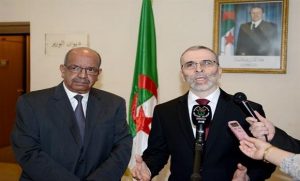 National Oil Corporation (NOC) president Mustafa Sanalla has told the Algerian foreign minister that Algeria had an “important role” to play for Libya and its oil industry.

Meeting with Abdulkader Messahel in Algiers today, Sanalla updated him on the problems faced by the NOC in the wake of Libya’s unstable security situation. Libya’s “backbone”, oil, had to be protected, Sanalla said. Messahel confirmed and reiterated this message on his Twitter page.

This was especially important given the shared borders and underground oil reserves between Algeria and Libya, he added.

Sanalla insisted the NOC had to remain united in order to be able to carry out its duties.

He praised Algerian efforts in seeking to find a way through Libya’s problems.

“Algeria, which oversees the dialogue between a group of countries on the crisis in Libya, has an important role to play in the stability of Libya and its oil sector, the foundation of its economy,” he said.

Algeria’s state-owned oil company Sonatrach has significant concessions in Libya through it international arm, Sipex, operating on the Ghadames Basin, on the Algerian border. However, despite major discoveries in 2012 and early 2014, it pulled its staff from Libya in May 2014 because of the political situation.

House of Represenatives (HoR) member Ali Al-Saidi from Wadi Shatti has, however, accused Algeria of being biased in its dealings with Libya. He revealed that HoR members had brought up the issue when the African Union delegation visted  eastern Libya yesterday.