Dialogue efforts must speed up say foreign ministers of Egypt, Tunisia and Algeria 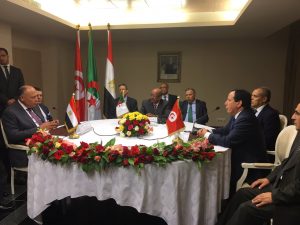 The foreign ministers of Algeria, Tunisia and Egypt have called on those responsible for the latest phase of the Libyan Dialogue in which changes are to be make to the Libyan Political Agreement so as to make it acceptable to both the House of Representatives (HoR) and the State Council (SC), to speed up the process.

Libya’s problems could only be solved through dialogue and a political solution, not violence or foreign interference, the three ministers added.

The comments were made as part of the ‘Algiers Declaration’ at the end of two days of talks between the foreign ministers of Egypt (Sameh Shoukry), Algeria (Abdulkader Messahel) and Tunisia (Khemaies Jhinaoui).

The closed-door meeting also emphasised the need to preserve Libya’s “territorial integrity, sovereignty and unity”. The three ministers warned that an unstable Libya would only hurt the country’s neighbours and the wider region.

Nonetheless, any solution had to be based on the Libyan Political Agreement, the three said in a joint statement. When the ministers last met, they issued the “Tunis Declaration”, an initiative to put mediation and dialogue efforts back on track.

The two components of the Libyan Dialogue, the SC and the HoR, are now formalising their delegations, a move welcomed by the foreign ministers.

It was announced the next round of talks would be held in Cairo, but no date was specified.