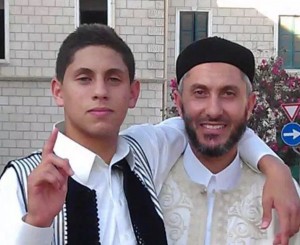 Abdulbaset Ghwaila photographed in Canada with his son Awais who was killed fighting in Benghazi last year (Photo: Social media)

The Libyan Scholars’ Authority, which is linked to controversial grand mufti Sadek Al-Ghariani, has condemned reports that one of its trustees had a close relationship with the family of the Manchester suicide bomber, Salman Abedi.

It is alleged that Abdulbaset Ghwaila, a Libyan-Canadian cleric who is a director of the Tripoli office of the Ministry of Awqaf (religious endowments) and in charge of appointments to mosques in the city, is a friend of Abedi’s father Ramadan.

Ghwaila, who is also head of the the Guidance and Awareness department of controversial grand mufti Sadek Al-Ghariani’s Tanasuh Foundation as well as a preacher and presenter of Ghariani’s Tanasuh TV station, has described the allegations as “baseless” and lacking in evidence, insisting that he is as much against the so-called Islamic State as anyone.

The authority, which is linked to Ghariani, praised Ghwaila, insisting that “he is known for his moderation”. They accused the media of creating hoaxes for “their own narrow political interests”.

It also said these “lies” could constitute defamatory statements and all legal options were being considered.

Ghwela had called for Libyans to undertake jihad in a 2014 YouTube video although he has claimed that those using this to suggest he supports the militants is to take his comments out of context and that, anyway, there were in reality anti-Qaddafi remarks.

In March last year, the death of his son Awais in Benghazi fighting with the radical Islamist Omar Mukhtar Brigade against the Libyan National Army put the spotlight on his own position and views as well as on allegations that the ministry had been taken over by extremists.

The brigade Awais fought with was headed by militant Islamist Ziyad Belam and is part of the Benghazi Revolutionaries Shoura Council over which Ansar Al-Sharia has (or at least had) financial and military control; Ansar has now supposedly dissolved itself.

Following the son’s death there were allegations that the father was anything but a moderate, was in fact a hardliner and had been been helping recruit fighters to join the militants in Benghazi.

He is also a founding member of Qudwati, the Islamist youth volunteers movement of which his son was a member and so too, reportedly, Salman Abedi.

Ramadan Abedi was arrested by Rada forces in the capital along with another son shortly after the Manchester attack.