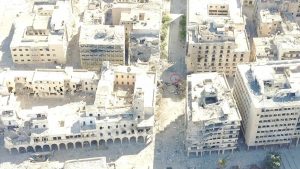 Militants in Suq Al-Hout (circled) before the demolition (Photo: LNA)

Militants in Suq Al-Hout are blowing up historic buildings to block streets ahead of the expected tank-led ground attack by the Libyan National Army (LNA).

A picture taken from an LNA drone today is said to show two militants moving between buildings at an intersection before the explosions were detonated. Among the damaged properties are said to be the Commercial Bank building, a law firm, the Benghazi North Court building and the former  internal security headquarters.

In the course of the day there have been at least ten air strikes on Suq Al-Hout and nearby Sabri. It is understood that more militants have attempted to break out of either enclave. On Sunday, troops said they shot dead three men trying to filter through the LNA lines around Sabri.

Meanwhile, it has been announced that commander of the LNA’s Dignity operations room in Benghazi, Brigadier Abdussalam Faraj, has tasked three officers with heading military operations in the Suq Al-Hout area.