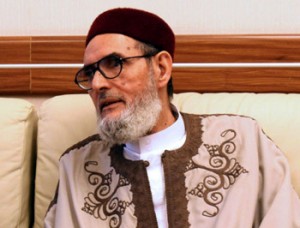 Libyan religious leaders linked to the controversial Sheikh Sadek Ghariani have rallied to his defence, inisting he is a religious scholar, not a terrorist, and have condemned all those who claim otherwise.

The Libyan Scholars’ Authority, an organisation controlled by Ghariani, was responding to his inclusion on a Saudi terrorist list.  It said it was surprised at the Saudi action.

Besides arguing at some length Ghariani’s theological qualifications, the organisation said that the failure of “major powers” to define a terrorist opened a wide door to accuse the honourable and innocent and distort the facts in order to get rid of those who actually opposed terror.

It said that Ghariani, who heads Tripoli’s Dar Al-Ifta and runs the Tanasuh TV channel, had the right to  deal with public affairs. It claimed the country should be grateful to the sheikh.

In an earlier edition, the Libya Herald said that it was the League of Libyan Ulema which had rallied to Ghariani’s support. This was an error and we apologise to the League for it.  The League has been noted for the past four years for standing against the views of Sadek Al-Ghariani and the various organisations he runs.