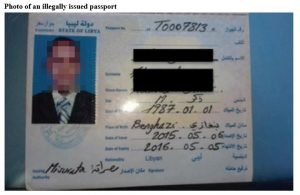 A report by the United Nations has confirmed that repeated attacks by Libyan militias, including Ansar Sharia, on its Civil Registry offices, are aimed at obtaining fake passports – ostensibly for illicit, illegal or terrorist activities.

The report states that ‘‘all Libyan parties, including Ansar al Sharia Benghazi and Ansar al-Sharia Sirte, competed to control the (Libyan) Civil Registry Authority and passport administrations. This allowed them to illegally issue passports, including to foreign fighters who subsequently travelled abroad’’.

‘‘The (UN Libya Experts) Panel has reviewed copies of illegally issued passports and was able to confirm the identity of one Sudanese national, who obtained such a passport in Misrata and travelled to Turkey in May 2015. In August 2015, Turkish authorities imposed visas on Libyan nationals travelling to Turkey in order to limit security risks posed by the political developments in Libya’’.

‘‘Civil Register Agency sources confirmed to the Panel that they do not have a Libyan national under the same name figuring in the (photograph) passport and born in Benghazi on 1 January 1987 in their register. They also confirmed that the passport was issued illegally in Misrata. The beneficiary of the passport (a Sudanese national) used this passport to travel to Turkey between May and September 2015’’.

The 299-page report clearly states that militias owe their loyalty to financial gain and not the internationally-recognized Libyan government. The UN report also underscores the need for Libya to have a regular army and police loyal to the legitimate civilian authorities and that attempts to build a state based on militias has so far proved unworkable.