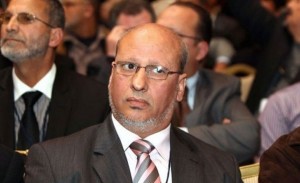 The Justice & Construction party (J&C), the political arm of the Muslim Brotherhood, has protested against a list issued by the House of Representatives (HoR) describing Qatar-linked Libyans as terrorists.

The list, signed by Talal Almaihub, chairman of the HoR’s defence and national security committee, includes J&C politicians and others believed to be Muslim Brotherhood leaders.

The J&C media office today described the HoR document as lies. “We have followed up a list which accuses some Libyan citizens of being terrorists including the chairman of the party Mohamed Sawan,” it said adding,”We consider this as defamation and it encroaches on the rights of citizenship and judiciary authorities.”

It also has Ali Salabi, the man considered to be the ideological brains of the Muslim Brotherhood, the Brotherhood’s current chairman Ahmed Abdullah Al-Suqi and its former head Bashir Al-Kebti.

Moreover, it includes public figures linked one way or another to the organisation such as the former deputy Prime Minister Awad Barasi and former deputy chairman of the National Transitional Council Ali Al-Aisawi.