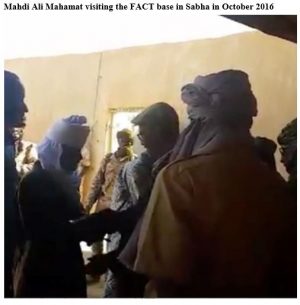 ‘‘Regional divisions constitute an obstacle to a political solution in Libya. Two regional alliances have coalesced around Libya. Chad, Egypt and the United Arab Emirates have broadly aligned positions, as do Qatar, the Sudan and Turkey’’, the United Nations reports.

‘‘Foreign interference in Libya has taken a more direct form with the increasing involvement of Chadian and Sudanese mercenaries’’, the report says. ‘‘Their actions in the oil crescent are a direct threat to the security and economic stability of Libya. The mercenaries are involved in criminal activities, including trafficking in persons and drugs’’.

‘‘In addition, repeated attacks against individuals and property by foreign armed groups in the south of Libya have increased communities’ sense of vulnerability and distrust towards LNA and the Misrata Third Force’’.

‘‘Former commanders of the Sudan Liberation Army/Minni Minawi confirmed to the Panel that Arab intermediaries and former regime operatives had assisted in, and cash transfers had facilitated, the rapprochement between major Darfuri commanders and the LNA General Command’’.

‘‘The Panel also received reports that commanders of the Sudan Liberation Army/Minni Minawi were received in Marj in mid-October 2016. Chadian groups were also hosted in Misrata-controlled bases in Ahjar al-Sawda’ and in Sabha. They founded the armed group Front pour l’alternance et la concorde au Tchad in April 2016, after they received important financial and military support in exchange for their mobilization in Libya’’.

‘‘According to sources from that group, the movement participated in anti-ISIL operations only. The sources added that all parties, including LNA, offered to recruit them. However, the Panel’s investigations revealed that the group participated in an attack led by the Benghazi Defence Brigades in March 2017, when it lost one of its main commanders’’.

‘‘The Sudan expressed its concern to the Panel that Sudanese armed groups involved in Libya would undermine peace efforts in Darfur. The Chadian authorities, in a meeting with the Panel, minimized the impact of Chadian rebels in Libya. However, on 6 January 2017, Chad announced the closure of its borders with Libya to prevent the infiltration of Chadian rebel fighters, after the LNA air force had struck the positions of the Front pour l’alternance et la concorde au Tchad in Jufrah in December 2016’’.

‘‘On 19 January 2017, the French authorities imposed financial sanctions on Mahamat Nuri and Mahdi Ali Mahamat, the founders of the group, for a six-month period. France has not clarified to the Panel whether this is related to their mercenary activities in Libya’’.

‘‘The deployment of Sudanese armed groups, with the approval of their hierarchy, started in March 2015, notably with the presence of the Sudanese Liberation Army/Minni Minawi (SLA/MM) in Ubari, al-Waw and al-Wig areas. At first, SLA/MM fighters joined Tebu-led brigades in the South of Libya, and in later phases in Benghazi. By March 2016, they had gained autonomy and played a key role in the capture and protection of oil installations by the LNA’’.

‘‘In early 2017, according to internal sources, some SLA/MM field commanders decided to withdraw from Libya due to insufficient levels of remuneration and fears of political repercussions. In fact, they blamed the movement’s leaders for ‘keeping the money for themselves’. A field commander interviewed by the Panel in February 2017 confirmed that mid-ranking commanders and the rank and file had been looking to go back to Sudan. He added that he himself was waiting to gather enough fuel and money to leave Libya’’.

‘‘In addition to SLA/MM forces, SLA/Al-Nur is engaged in Libya, alongside the LNA. According to sources within the movement, they had 1,500 fighters in Libya by mid-2016. They had been approached by Arab intermediaries to facilitate their contacts with the LNA.

‘‘Ex-JEM commanders have also joined the Libyan armed conflicts. Abdallah Jana is such an Ex-JEM commander. He entered Libya with 13 vehicles in 2016, but increased his assets to 70 vehicles by February 2017. He is reported to visit Sudan every two to three months to recruit new fighters.

‘‘Justice and Equality Movement (JEM) officials interviewed in 2016 confirmed that the JEM had been approached by several Libyan parties, including Islamist figures and the LNA, but they denied any actual involvement in Libya. However, interviews with JEM and Ex-JEM officials revealed that there was at least one attempt to join Libya from South Sudan, in late 2015’’.

‘‘Yehya Omda, Artillery Chief of Staff of the movement, was able to leave South Sudan and deployed along the Chadian-Libyan border. Ex-JEM sources also reported that Omda is recruiting amongst Sudanese refugees in the region of Um Nabaq in Chad.

‘‘The presence of Chadian groups in the Fezzan dates back to late 2014. They were unable to operate on the Chadian side of the Libyan-Chadian border and were hosted in Sabha by the Third Force on the condition of ceasing their military actions against the Chadian regime, according to Third Force sources’’.

‘‘However, the security developments in Libya and the spread of fighting to Sirte, Sabha, al-Jufra and Braq al-Shate’ led to FACT’s recruitment by Misrata-allied forces. They are deployed at the al-Hjara al Sawda base in al-Jufra and in Sabha’’.

Another group of mercenaries, ‘‘Conseil de Commandement Militaire Pour le Salut de la Republique (CCMSR) was created in July 2016 by former UFDD spokesperson, Mahamat Hassan Boulemaye. The CCMSR has split from the FACT. On 14 April 2016, a CCMSR base in Doualki, near Sabha, was bombed by LNA forces resulting in six dead. This was confirmed by Boulemaye who blamed President Deby for the attack’’.

The ‘‘Rassemblement des forces democratiques (RFC) had started operating in the southeast of Libya by the end of 2015. It was allegedly involved in attacks against convoys of drug traffickers. Allegedly, it was deployed in the Oil Crescent, alongside the LNA. The Panel could not reach out to sources within the movement. Two of the checkpoints (between Rebiana and Sabha) run by the group were allegedly attacked by ISIL cells early 2016’’

‘‘The Panel confirmed the presence of Palestinian military experts in Tripoli. Interviewed by the Panel, a Palestinian official denied any activity in Libya. However, he confirmed that eight members of his faction, who were members of the Palestinian diaspora in Libya, had been arrested in Tripoli in the course of 2016. The Panel is still investigating the case’’.