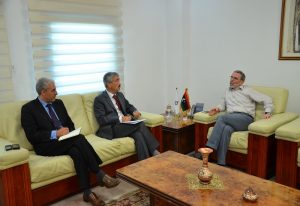 Libya oil production is on course to hit one million barrels per day (b/d) by the end of July, National Oil Corporation chairman Mustafa Sanalla has told the British ambassador, Peter Millett.

This would the first time such a figure had been reached since 2013 and Sanalla cited his employee’s work ethic as the main reason.

However, Sanalla noted the NOC faced repeated attempts to disrupt and block production. He said he could not understand why people doing did not not realise how important Libya’s key asset, oil, was to the country’s stability and prosperity.

Smuggling, depletion of state resources and the fallout from the Qatar crisis were also discussed.

Referring to a number of trips recently to Libyan oilfields, Sanalla also spoke about the need to improve safety for oil workers, protection of the environmental and helping boost local communities.

Sanalla also hosted the Turkish Ambassador, Ahmet Dogan, who invited the NOC chief to the World Petroleum Council Congress to be held in Turkey next month.

Despite the Turkish embassy having reopened its Tripoli base, Turkish oil companies have not so far resumed operations. Dogan said he hoped Libya would stabilse soon so the companies could return.