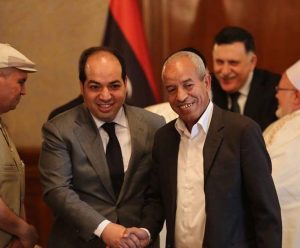 A new Presidency Council-approved agreement on the right of Tawerghans to return to their deserted hometown has been signed by Misratan and Tawerghan civic leaders, including  Misrata-Tawergha Reconciliation Committee chairman Yousef Zarzah, Tawergha local council leader Abdulrahman Shakshak, and Misrata mayor Mohamed. The agreement was signed in Tripoli at the Prime Ministry office in the presence of Presidency Council (PC) head Faiez Serraj and his deputy Ahmed Maetig, himself from Misrata, and the minister for displaced persons, Yousef Jalalah.

In a brief speech, Serraj has promised to provide all required infrastructure services to Tawergha.

From his side, Maetig said that PC would supervise the return of residents so that they were safe and secure.

“The agreement has bough to an end long sessions of talks which been taken a great deal of time. Now we are looking ahead for better future,” he said.

However, the reconciliation agreement, while speaking of the Tawerghans returning as well as of compensation for both communities for damages suffered, makes no mention of a date when they can go home.

It follows a statement last week by Tawerghan civil society activists that they intend to return to the town this Thursday and from there issue a call to the rest of the more than 40,000 Tawerghans living in camps across Libya to come back to their hometown.

There are suggestions that, far from making that happen, today’s signing in the presence of Serraj is an attempt to again delay such a return. There is still, in Misrata, a minority opposed to it ever happening.

For his part, though, State Council president Abdulrahman Sewehli, also from Misrata, has given his full backing to the Tawerghans’ right to return, saying that it was high time they did so, and yesterday announced on his Twitter feed that “key steps” to bring it about were “coming soon” – a clear reference to today’s agreement.

“Kudos to Libyan patriots who genuinely care about reconciliation through healing the nation’s wounds”, he tweeted.

While commending today’s agreement, Human Rights Watch has called for it  to be implements quickly.