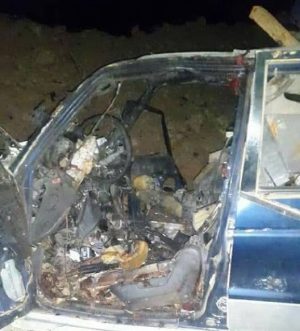 The Sidra suicide bomber’s car after he had blown himself up (Photo: supplied)

Libyan National Army (LNA) forces around Sidra are reportedly on high alert after a suicide bomber was stopped  at around 1am today at the main Gate on the highway passing the oil export terminal.

The man, identified by his accent as a Sudanese or Chadian, was ordered out of his blue vehicle. As he left it, he detonated his suicide vest, killing himself but only lightly injuring a member of the security forces.

Local sources told the Libya Herald that it was feared that the suicide bomber was the first  part of a wider raid. The road has been closed and soldiers have mounted a search for further attackers.