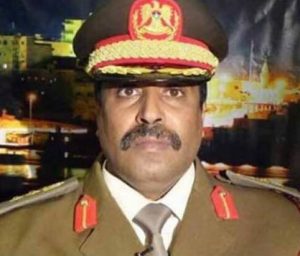 The Libyan National Army’s chief spokesman, Colonel Ahmed Mismari, claims that the army has documentary evidence of Sudanese government collusion with Qatar and Iran in supporting terrorism in Libya.

“We have records of secret meetings of the Sudanese army leadership in the presence of [President Omar] Bashir [which show] a clear conspiracy with Qatar and Iran to support terrorism in Libya, Egypt [and] Saudi Arabia,” he reported on the LNA’s Facebook page

At a press conference last night in Benghazi, he gave details of the alleged Sudanese collaboration with Qatar and Iran, stating that the latter two had military factories in Sudan which were suppyling weapons and ammunition to terrorists both in Libya and elsewhere.

Like Qatar, he claimed, Sudan was actively supporting the Muslim Brotherhood in Libya and Egypt. The two were also actively working alongside Turkey and Iran.

Notwithstanding  reports of Sudanese mercenaries fighting both for and against the LNA, relations between the eastern authorities and Khartoum have progressively worsened in recent weeks, in no small part to the presence of of Sudanese among militants fighting the LNA in Benghazi.  Some 20 are reported to have died fighting in Libya.  Tuesday’s suicide bomber in Sidra was also apparently a Sudani.

Two days ago, eight Sudanese children were flown to Khartoum from Libya Their parents had joined the so-calld Islamic State and were either dead or imprisoned.  Four other children of Sudanese fighters are still awaiting repatriation from Misrata.