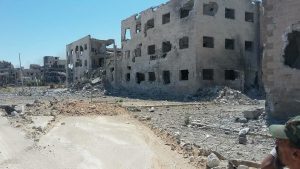 LNA spokesman Colonel Ahmed Mismari told the Libya Herald that the whole area had now been liberated, although it had lost six men in the fighting today, one of them a commander. Elsewhere though, he said there were still some snipers operating in the area, such a by the old city hall, but these were being dealt with.

At a press conference today, the LNA said the militants were hiding in drains and underground tunnels.

This evening, heavy clashes were reported in Al-Sharif Street which separates the old town from Suq Al-Hout.

Meanwhile there have been extensive and heavy bombing raids during the day over Sabri, where LNA units are reported to be advancing from the eastern part which it already controls. The fighting was now near the Wahda Bank, close to the Suq Ahdash area and the unfinished Hyatt Regency hotel on the sea front.

In a separate incident, two LNA soliders, named as Abdussalam Al-Twergi and Akram Al-Warfali, were killed today in a mine explosion in Lathama district which is near Sabri. The area has been liberated for some time. 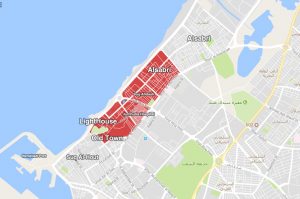