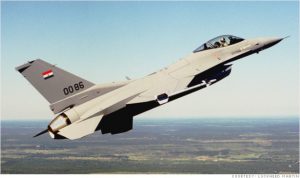 The Egyptian airforce clams to have destroyed a convoy of trucks laden with weapons as it crossed from Libya south of the Siwa oasis between the Qattara Depression and the Egyptian Sand Sea in the Western Desert. It posted footage said to show the airstrikes going in on Tuesday as the convoy moved apparently slowly through a remote desert area. 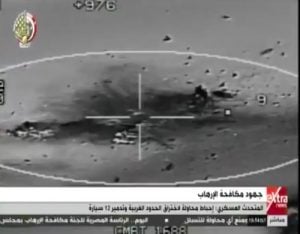 Some of the wrecked vehicles after the airstrike (Photo: Egyptian Airforce)

A military spokesman in Cairo said that the 12 vehicles had been hit when they were some 60 kilometres inside Egypt. He said the airstrikes had been ordered as part of an intelligence-led operation. After the air attack, ground forces were said to be pursuing the survivors.

The Egyptians have revealed nothing about the identity of those in the convoy. However the suspicion is that whether they were militants or just smugglers, the weapons, explosives and ammunition in the trucks were ultimately destined for terrorists based in Sinai.