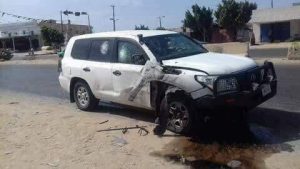 A picture said to show one of the UNSMIL vehicles after today’s ambush (Photo: social media)

It is understood that the UNSMIL team whose convoy was ambushed this afternoon near Zawia has been freed and is in a safe place. UNSMIL officials were reluctant tonight to speak about what happened until it was certain that the personnel and their guards were out of all danger.

Nevertheless outgoing UNSMIL chief Martin Kobler messaged thanking the Government of National Accord (GNA), House of Representatives (HoR) members for Zawia and the local authorities for helping ensure that safety of the UN staff and said that he was looking forward to their safe return to Tripoli.

Normally reliable sources have told the Libya Herald that the UNSMIL team consisted of human resources specialists who were visiting the Department for Combating Illegal Migration (DCIM) in Sorman.

It was on their way back to Tripoli that the five-car convoy carrying 13 UN staff was attacked at the Farouk Bridge checkpoint.  The third vehicle in the convoy was hit by an RPG.  The first vehicle sped away and reached Tripoli where its occupants are now back in a protected compound. The fourth and fifth vehicles with three UN personnel aboard turned round and headed to Tunisia.  Those travelling in the second vehicle stopped to get their colleagues out of the damaged SUV.  All seven of them were then taken by locals to a place of safety, where the GNA was said to be making arrangements to bring them back to Tripoli.

The UN organisation refused to give the identity of the seven personnel caught in the ambush, along with a dozen security guards.

Kobler revealed that after the attack, UNSMIL had been able to make contact with its people. He said there were no reports of any injuries.

However a photograph published on social media, purporting to be of one of the UNSMIL vehicles, shows at least two side window impacts on the bullet-proof glass and severe damage to the right-hand side, with what appeared to be ruptured oil or engine coolant flowing from the front.

An UNSMIL spokesman said she was unable to give any comment on the circumstances of the ambush until those involved had been debriefed.

Nevertheless, one report said that the convoy had been attacked with rocket-propelled grenades and automatic weapons.  Another witness said that three of the vehicles had managed to escape but one was caught and that two people had been injured.

The Libya Observer quoted Zawia police chief Abdullah Bitro as saying that the UNSMIL staff had been secured in Sorman and were to be flown to Tripoli.

This story has been updated.