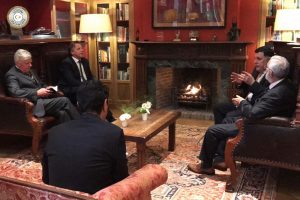 The Dutch government is to reopen its Tripoli embassy. The news was broken to Presidency Council (PC) head Faiez Serraj and Government of National Accord (GNA) foreign minister Mohamed Siala at a dinner tonight in the Hague during their two-day visit to Holland.

Their host, Dutch foreign minister Bert Koenders, flanked by ambassador Eric Strating, is understood to have said that diplomats will move from Tunis back to Tripoli in September or October. The envoys were pulled out in July 2014 as security collapsed after the Libya Dawn takeover in the capital.

Holland’s NPO Radio 1 broadcast this evening that Koenders had admitted that security in Tripoli still left much to be desired. But he said returning Dutch diplomats to Libya was an important first step. “This is necessary to be able to follow the complex situation there, to be able to have better contact with the Libyan authorities and our assistance programmes to better guide to the country.”

In May 2016, Koenders became the seventh EU foreign minister to fly into Tripoli in a show of support for the then recently arrived PC .