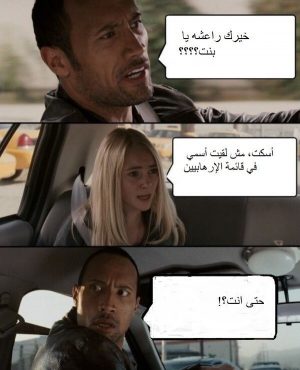 In an unusually undiplomatic move, the Italian embassy has tweeted a joke mocking the list of 75 Libyans compiled by the House of Representatives’ defence committee whom it accuses of being terrorists linked to Qatar.

In the photo cartoon, in typical Tripoli Arabic dialect, a taxi driver asks a young women why she looks so scared. She tells him to shut up and that her name in on the list of terrorists. He replies “You as well?”

The appearance of the cartoon on the Italian embassy twitter feed has angered and upset a number of people, mainly in the east of the country, and there have been threats of anti-Italian protests, but it has also amused others in the west.

The cartoon, evidently devised either in Tripoli or by a Tripolitan, used photos from film Race to Witch Mountain with actors Dwayne Johnson and AnnaSophia Robb.

Saif Al-Islam’s former jailer defends himself after LNA orders his brigade to disband; Madi says disbandment nothing to do with the Saif release