In its over four years of implementation by MEDA in Libya, the USAID Libya Women Economic Empowerment project (LWEE) has witnessed first hand how technical support and the sharing of knowledge and expertise make a difference in the lives of the women of all ages – and at times men – it touches.

In addition to delivering business skills training in the classroom and online self-guided courses through its business development portal known as Nebi Net3alem (or #WannaLearn in Arabic) amongst a number of activities, LWEE offers business networking opportunities for women (and increasingly young men) in various cities and regions of Libya.

Networking is an important element of advancement not only socially or career wise but also in commercial endeavours, be they long established businesses, start ups or entrepreneurial pursuits still on paper.

For the men in Libya this is relatively straightforward, they are used to meeting in different settings, at the marbo3a (the sitting room reserved for non-family male members), at weekend BBQ and gatherings at their farmhouse (for those that own one), at business meals, at the events held at business men councils or chambers of commerce or even simply when they go for a quick smoke on the terrace of the office or smoking shisha in a café somewhere in town together.

It is during these meetings that business is conducted, experiences recounted, tips and updates about the latest in the country’s economy in terms of banking loans, fast selling products, demand and supply of goods, foreign currency availability, best approaches to a difficulty etc.. are exchanged and deals made. It is also a tried and tested support system.

However, women who make a considerably less percentage of the official private economy are excluded from these opportunities and in every day life, most of their gatherings tend to concentrate on social and family events, even for the seasoned business woman. This exclusion is detrimental to women’s income, professional growth and their slice of the market. This is especially true in the current economic situation where we have seen rapid devaluation of the Libyan Dinar since 2015 combined with challenges to access to liquidity. This has resulted in a new set of difficulties for the ordinary Libyan clientele and their business/services providers, and for women entrepreneurs is yet another barrier to success.

LWEE has been trying in its own way to close this gap and encourage the concept of business networking for women in Libya, especially for those entrepreneurs who have less exposure.

We launched our networking event series called Business Tea Party, back in December 2014 in Tripoli. The idea was to encourage professional conversations between young and more mature entrepreneurial women no matter what their line of business was, over of a cup of tea (or coffee) and sweets – just the way we like it in Libya.

From the beginning, it was evident that guests loved the prospect of meeting others in the same line of work, or people who were a step ahead of them, or women whose business complemented theirs. The participants exchanged names of good lawyers who could assist with registering their business, they learned about the steps of how to approach taxes, some found the long-searched-for ideal premises, others entered into business with each other or had the occasion to showcase their products or find a mentor. It became a friendly atmosphere full of positivity where even friendships across the country were struck. 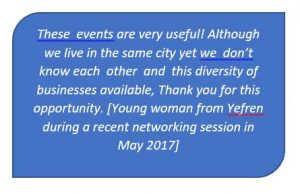 To further encourage the conversation special themes were introduced to some of the events; subjects such as photography, food, e-payment, competition winners, alumni etc.

The event garnered interest to the point we received requests from men to attend. So, youth and men who had innovative products or had demonstrated championship of women’s full participation in the economy were invited at times to enrich and diversify the conversation.

The popularity of the networking event grew and LWEE team moved towards holding business networking events in other locations. Benghazi, Yefren and Ghadames are some of the cities where this event was hosted and more are being considered for the pipeline. More than twenty get together activities from which over five hundred women have already benefited – took place.

What the participants liked most was that as long as there was a place, anyone could attend. These eager entrepreneurs only needed to write to us with their request and the nature of their project, business or idea. It was first come first served on the guest list. There were no other criteria or elitism, which is something we had been suffering from in Libya.

These networking events have not only managed to introduce Libyan entrepreneurs to each other but more so, to show how much hidden talent and passion there is in Libya. The Libyan spirit is very much alive and kicking. Libyan women are smart, creative, have a great sense of humour, and are full of hope regardless of their age. Those we have met are not giving up and they keep rising no matter what fate throws at them in a country that has suffered 42 years of one of the harshest dictatorships on earth followed by a confusing six year long civil war.

Linking these women together has proven to be a most rewarding task, not only economically but also on a peace-making dimension. Women in Libya are a vital part of the economic equation on all levels, but doesn’t communication, dialogue, discussion, listening, sharing, getting to know one another and support each other somehow translate in efforts towards peacebuilding? They are the very essence of it.

Women are at the heart of everything in Libya and in life, and we hope that LWEE has been able to play a humble role in their success.

Intissar K. Rajabany is MEDA’s Libya Country Manager who have been working on the Libya Women Economic Empowerment project since 2013. She can be reached at [email protected]