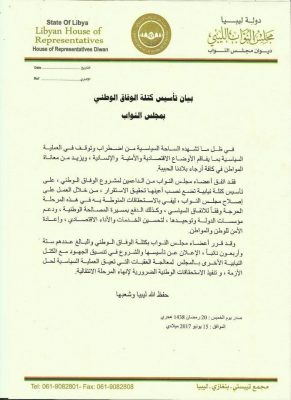 A new bloc aimed at supporting the Libya Political Agreement (LPA) has been formed in the House of Representatives. The National Consensus Bloc says that it has 46 members and that numbers are rising. It says it backing national reconciliation, security and economic change. It also wants a reform of the HoR and will work with other bloc to achieve this.

“Reform” is believed to include replacing Ageela Saleh as the HoR’s president and moving the parliament away from Tobruk.

Although the announcement does not name any of the 46 members whom it says have joined, one of the leaders of the new bloc is said to be Ali Al-Takali, from the Tripoli suburb of Ain Zara. Most of the members are thought to be from the west of the country.

Takali is one of a number of HoR members who are increasingly impatient at the way the parliament is being run at present. Earlier this month, some 94 members called for Saleh to be sacked, accusing him of “grabbing all the powers of the House of Representatives and ignoring the rest of the deputies”.

The number of those who want Saleh removed is, in fact, thought to be higher, but they are seen to be fatally divided as to what to do. At a gathering this week in Tobruk of a number of key members who want a new a HoR president, around half suggested heading to Tripoli and having sessions there while the other half rejected this on the basis that for them it was too dangerous a move. They felt they would have to stay in Tobruk and therefore negotiate with Saleh to try and get him to change his style of leadership.

There are a number of blocs in the HoR, some of them regional, but the two main ones are the National Sovereignty Bloc led by Khalifa Al-Daghari from Qasr Libya and the Unity Bloc led by Deputy HoR President Emhemed Shouaib from Zawia. The former, with about 50 members of which some 20 take an active role in HoR proceedings, is opposed to the LPA. The latter with some 100 members supports it.

It is not clear why a second pro-LPA is thought necessary.