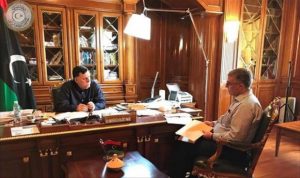 Strict security measure will be taken to guard against those who seek to interfere with power supplies said the Presidency Council (PC) today.

A stern-looking PC head Faiez Serraj called in the GECOL president Abdul Majid Hamza to demand what had caused much of the west and south of the country to endure the longest power outage since January,  when a pipeline blockade cut fuel to the key Ruwais power station which currently produces less than its 900 MW design capacity.

Serraj told Hamza that all available GECOL personnel had to be committed to restoring and maintaining power supplies. He also said the government would “not tolerate” any interference with the electricity distribution system. Strict measures would be taken and the authorities would not be lenient with offenders.

In a statement put out after the meeting, the PC said that besides discussing urgent measures to sort out the present crisis,  Serraj had pressed for an overall plan to fix the power deficit. He urged Hamza to speed up international consultations aimed at achieving this.

Meanwhile, GECOL has repeated its demand that as the heatwave continues both private and commercial consumers should cut their power use to maintain what they described as the stability of the electricity grid.