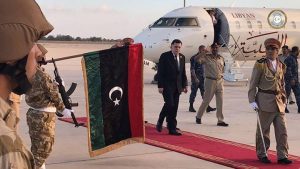 Faiez Serraj after his landing from Ethiopia (Photo: PC)

Presidency Council (PC) head Faiez Serraj was aboard the first plane to touch down at Tripoli International Airport for three years yesterday.

On his return from an African Union summit in Addis Ababa, Serraj said efforts were underway to fully reopen the airport and bring it back into service.

He was greeted by fellow PC member Ahmed Hamza, municipality members, the Presidential Guard and representatives from the State Council.

The Presidential Guard moved into the airport in late May, the first time in almost three years that it had been under the control of recognised government forces.

Taher El-Sonni, an advisor to Serraj, praised the “great reception” by council figures, tribal elders and the security forces. He said the first landing since 2014 was a critical step for the capital’s stability.

The airport was severely damaged in the heavy clashes that broke out across the capital in mid-2014 and has been closed ever since.

The Prime Minister of the so-called National Sa;vation Government, Khalifa Ghwell, presided over an apparent reopening in February 2016.

In reality what was reopened was the old VIP terminal, which escaped the general destruction in mid-2014 when the Misratan-led forces attacked the Zintani units occupying that had occupied it since the Revolution.

These MIsratan militias withdrew from the airport in April this year. It was then occupied by the Kani militia from Tarhouna, who left in May following threats from pro-PC Tripoli Revolutionaries’ Brigade of Haitham Tajouri.