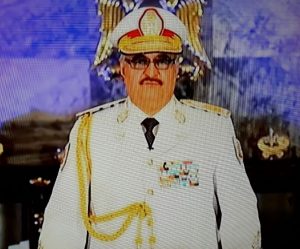 Even though some militants are still besieged  by the Libyan National Army in a small Sabri area, armed forces commander-in-chief Khalifa Hafter tonight went on television to announce victory.

In a brief address,  Hafter, wearing a white uniform with gold braid, thanked the armed forces for their bravery and the people for their courage in the long battle to drive the militants out of the city. 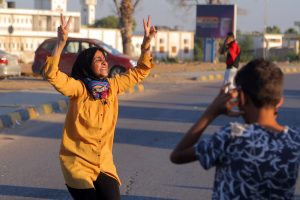 This afternoon Benghazinos were in the mood to celebrate. Convoys of cars drove through the 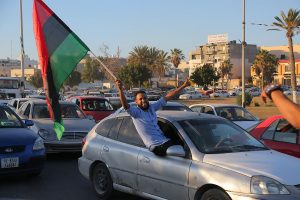 streets with people waving Libyan flags from the windows.  A lot of young people were giving military salutes.

Earlier in the day, just after troops were told by their commanders that the battle was effectively over and they were shouting jubilantly, a lone LNA warplane roared over Suq Al Hout and Sabri wiggling its wings as a sign of victory. 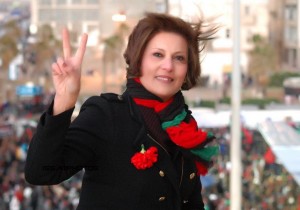 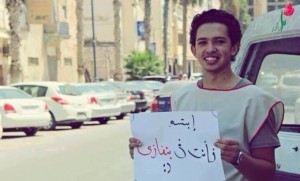 The militants included the Benghazi Revolutionaries’ Shoura Council and its UN-designated terrorist allies, IS and Ansar Al-Sharia. 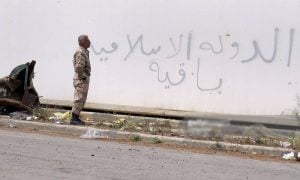 This morning as the guns fell largely silent in Benghazi, an LNA officer (above) stopped and gazed at a piece of militant graffito. It read “Islamic State will always be here”.