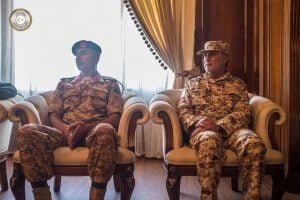 Military forces massing around Tripoli, planning to overthrow the Presidency Council (PC) and re-install Khalifa Ghwell in power halted their advance after PC head Faiez Serraj ordered forces in the capital to resist them and called on “friendly countries” to take action “to ensure the security of the capital and to protect civilians in the event of any recklessness by these rogue groups”.

The PC described the militants as “outlaws”, saying they would be be dealt with decisively with force.

The call to friendly countries has been interpreted as a request to western powers to bomb the militants.

Several different forces are said to have rallied to the offensive. Apart from Saleh Badi’s Samoud forces from Misrata, another Misratan commander, Mohamed Issa, was said to be in Tarhouna today rallying the Kani brigade and the forces of Salah Marghani, while Zawia Islamist commander Abu Obeida Al-Zawi was said to be preparing his forces. So too was Amazigh Islamist leader Said Kuwejil whose militiamen were forced out of the capital along with all the other militias supporting Ghwell at the end of May.

Badi himself was reported to be in Gharyan trying to encourage forces there to join the movement, while there were claims that Ghwell had provided a number of vehicles to militants in Emsalata to ensure they joined as well.

Altogether, it was reported that some 300 armed vehicles supporting Ghwell had moved towards Tripoli yesterday. Those coming from Misrata were reported to have stopped Garabulli, some 60 kilometres weat fo Tripoli, following Serraj’s warning.

This evening, though, there were reports that armored vehicles belonging to the Benghazi Defence Brigades had entered the Nakeel resort near Tajoura. Residents in the area also reported hearing jets flying overhead.

During the day, the PC mobilised its security services in the ministries of interior and defence and the Presidential Guard. Two of the most powerful militia leaders supporting the PC, those led by Haitham Tajouri and Abdul Ghani Al-Kikli (Ghneiwa) have moved forces into several locations in the capital. Ghneiwa reinforced positions on the Airport Road, in Abu Sleem and in Hadba.

Whether they are prepared to bomb the militants, the Ghwell push appears to have cause some alarm among the PC’s international allies. Following the PC statement, British ambassador Peter Millett tweeted: “Tripoli is calm. Agree that criminals pose threat to civilians. Important that they will no cause violence.”

This was echoed by the Italian embassy which said: “Stop playing with the security of the capital. Respect its citizens and their safety. Tripoli belongs to all.”

UNSMIL followed suit, saying it was “disturbed by reports of armed groups mobilising around Tripoli. Remind parties of duty to protect civilians under International Law.” It also reiterated its support for the PC.