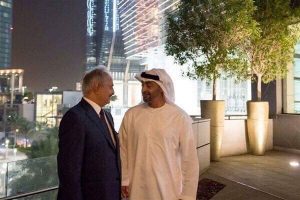 In a statement afterwards congratulating Hafter on the liberation of Benghazi, Sheikh Mohamed expressed the UAE’s support for what he said were the Libyan people’s “choices and ambitions” for a stable and secure life. The crown prince also wished the Libyan National Army “good luck” in achieving further victories against extremists and terrorists “in order to liberate all Libya from these destructive menaces”.

Cooperation with “other regional and international actors” in countering extremism and terrorist organisations was also discussed. This is seen as a reference to Egypt and Saudi Arabia.

For his part, Haftar thanked the UAE for its support so far.