LNA soldiers injured when trapped Benghazi militant blows himself up 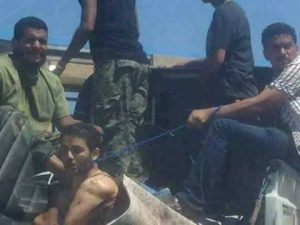 The detained man (bottom left)  after the militant with him blew himself up (Photo: social media)

Three soldiers were injured in Benghazi this morning when a militant, who had apparently  escaped from Sid Akribesh, blew himself up when he was cornered.

The militant, who said said to be a Tunisian, was found in a school opposite the Al-Najma football club in the  Salmani district.  When troops advanced to detain him he detonated a suicide vest or a grenade. Another man with him was however captured.