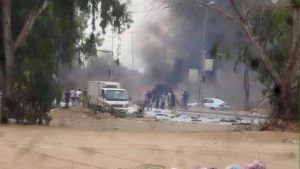 To the despair of its inhabitants, Garabulli has remained a battleground for a second day with pro-Ghwell forces from Misrata still reportedly occupying the town. They have been exchanging gun and rocket fire with pro-Presidency Council (PC) units sent out the 50 kilometres from Tripoli to stop them.

There have been unconfirmed reports that two jet fighters from Misrata dropped bombs. It has also been said that Grad rockets have been fired.

The townsfolk are trapped between the opposing forces and because the coast road is closed they have no way of escaping the violence. At noon, municipality spokesman Al-Shareef Jaballah told Reuters by phone that he could hear heavy gunfire. He said he had received reports of two people living in the town, one of them an Egyptian, being killed. Casualties among the combatants are unknown.

“The clashes have resulted in severe damage to houses and shops because of indiscriminate shelling,” said Jaballah, “and forced a large number of resident to flee.”

A senior figure inside the town has told this newspaper that the rival forces have undergone a change in the course of the day. Some 330 vehicles together with heavy artillery are reported to have come from Misrata. It is reported that the new arrivals are members of Sala Badi’s Samoud militia and the Benghazi Defence Brigades which have been leading the attack, or have come to support them.

Meanwhile some of the militias from Tripoli which came out on Friday to block the advance of the pro-Ghwell forces have withdrawn back into the capital. These include Abdul Rauf Kara’s Nawasi Brigade and Gneiwa’s Abu Sleem forces. The only force now opposing the attackers is Haytham Tajouri’s Tripoli Revolutionaries’ Brigade.  It is unclear why these militias have been pulled back but it is possible that the PC fears a second attack on Tripoli from another side.

UNSMIL has today messaged that the Garabulli threat to Tripoli’s security was unacceptable. It urged no further escalation in the fighting. 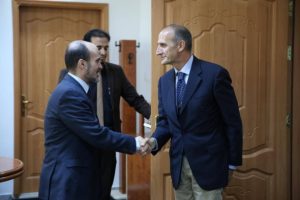 Also today,  UNSMIL security chief, Italian general Paolo Serra was in Tripoli to meet PC member Mohamed Al-Amari. It is not know whom else Serra met but his visit must have focused on the imperilled security in the capital.

On Friday as pro-Ghwell forces were advancing towards Tripoli, PC head Faiez Serraj said he would ask for “friendly countries” to take action against these “rogue groups … and outlaws”.