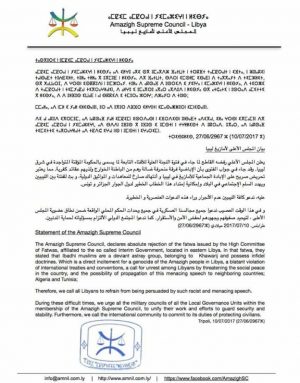 The Supreme Amazigh Council has accused the Islamic affairs and endowments authority that is part of the Beida-based interim government of inciting genocide against the Amazigh community.

It follows a fatwa last week from the authority damning Ibadis as infidels and “Kharijites”.

Ibadi Islam, which is neither Sunni nor Shiite, is followed by a large number Libyan Amazigh, as well as Amazigh in Tunisia and Algeria. It is also the official form of Islam in Oman.

The council, which is accepted by Amazigh communities throughout western Libya including Zuwara, Nalut and Jadu, has labelled the fatwa a threat to peace in Libya as well as a source of potential conflict with Tunisia and Algeria. The Benghazi-based endowments authority was being both racist and bellicose, its said, calling on Amazigh towns to step up security to prevent attacks on Amazigh individuals by militants.

The statement by the Benghazi endowments authority, which is firmly in the hands of Salafists, has already caused outrage across Libya. Even before the Supreme Amazigh Council responded, it was also seen as severely damaging relations between the Amazigh community and the eastern authorities.

Until now a significant proportion of those communities have supported the House of Representatives and the Libya National Army, although there is also a small, well-armed Islamist minority that backs Khalifa Ghwell. 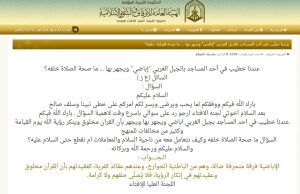 The statement from the eastern Fatwa authorities damning the Ibadis