Presidency Council should be cut to three says Dialogue 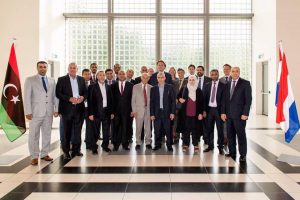 HoR and SC members in the Hague (Photo: Dutch government)

The Libya Dialogue delegations meeting in the Hague have recommended that the Presidency Council should be reduced to three members and be separate from the government.

The House of Representatives (HoR) and State Council (SC) delegates also agreed there needed to be a united Libyan army operating  under the authority of the state.

The delegates, who left the Dutch capital today, also proposed that a draft constitution should be drawn up by a committee made up of five members each from the HoR and SC . This would be set up by the heads of the respective dialogue committees with the help of the new UN envoy Ghassan Sallamé.

Finally, it was concurred that Internally Displaced Persons needed to be returned home and have their properties rebuilt.

Both sides agreed that, with amendments, the Libyan Political Agreement (LPA) remained the “most viable instrument for meeting Libyans’ demands for peace and stability”.

The final communiqué came after a week full of discussions hosted the government in the Netherlands. Dutch foreign minister Bert Koenders has has been at the forefront of much of the talks.

Yet, HoR President Ageela Saleh is reported to have said the HoR delegations was not in a position to negotiate and that the talks should have been held in Libya.

It had been expected that Sallamé, would attend the meetings. He was invited but is reported to have declined while wishing the Dutch mediation and the Libyan delegates every success.