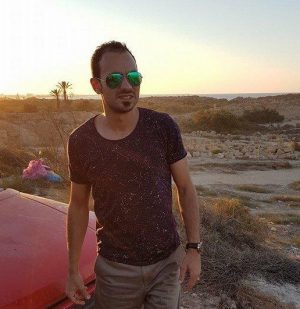 Standing in a queue for long hours has become a necessary way of life for so many Libyans these days – most commonly outside a bank, waiting for hours to withdraw a few dinars, and then sometimes being told there is no money available! But there are other queues – there was food distribution in Ramadan, for example.

A short while ago, a young man named Ahmed Al-Bey was standing in a queue in Tripoli, waiting patiently to reach the head of it. Out of the blue, someone offered him LD50 to take his place. Ahmed was not particularly pressed for time; he could come back another day. So he accepted. He took the money and surrendered up his place.

But it gave him an idea. There could be money to be made out of standing in queues.

He decided to set up a small business with a few adverts on social media, hiring himself out for LD 50 a time to be the “Queue Man”, to stand in a line for others.

It took off. It turned out that there were plenty of people who were willing to pay LD 50 for someone else to queue for them. Sometimes it can involve a wait for hours. Other times it is shorter. When he gets to near the head of the queue, he phones the client who then comes and takes his place.

The business has grown quickly, so much so that Ahmed has now recruited a number of young Libyans to stand in a queue for others.

“It’s very encouraging,” said one Tripoli businessman. “This is entrepreneurialism in action. Despite the problems, here is a young man trying to make money a good way – instead of joining a militia.”