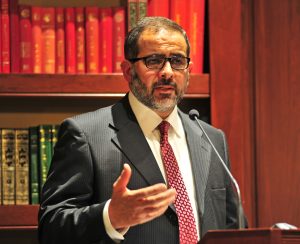 The Libyan Institute for Advanced Studies (LIAS), headed by former Libyan ambassador to the UAE Aref Nayed, has welcomed the call by Presidency Council chairman Faiez Serraj for parliamentary and presidential elections, but wants them to take place in five months’ time, on 17 December, not March next year, as demanded by Serraj.

They need to be brought forward, Nayed says, to avoid a potentially dangerous democratic power vacuum.

In a letter to the new UN special envoy Ghassan Salamé congratulating him on his appointment, Nayed says that fresh elections will renew the legitimacy of Libya’s legislative and executive institutions and, as such, help extricate the country from the present mess.

However, he and LIAS are convinced that the “road map” and the various details as presented by Serraj will in fact stop polls taking place. The result, he warns, will be that all existing entities will continue in place and the current situation be extended “indefinitely”.

Instead, Nayad proposes that UNSMIL, along with the Arab League and the African Union, help organise parliamentary and presidential elections by 17 December.

This, Nayed says, is when the Libyan Political Agreement signed in Skhirat on 17 December 2015 will expire, and is also the deadline set by Khalifa Hafter for a political solution to the Libyan crisis.

There needs to be elections by that date, Nayed says, to avoid a power vacuum because without a newly-elected parliament, the construction of a democratic state will be a risk.

The LIAS head points out that the former General National Congress (GNC) had in fact made provision for head-of-state elections when it adopted the proposals of its February Committee to set up the House of Representatives (HoR). All that is now needed, he says, is for the HoR to activate the GNC’s proposals for presidential elections and at the same time pass the same law for fresh parliamentary elections that the GNC passed, thus avoiding any need for potentially complicated and protracted discussions “with any other body” – in other words, the State Council.

To help the polls happen, Nayed wants the Arab League, the African Union, and the UN, to “support, monitor, and protect the elections and ensure the immediate implementation of their results without procrastination or opposition from any of the parties involved”. In particular, the letter to Salamé says, the UN should coordinate military and security planning with the various authorities on the ground across Libya so as to ensure that polling can be carried out freely and securely.

“Now, after the liberation of Sirte and Benghazi, and the securing of Tripoli against the recent attacks, the argument of the lack of security capability to hold the elections has become a flimsy argument,” Nayed states.

The results of such elections would “overrule the legitimacy of all existing bodies and structures, and replace them fully and categorically”, he says.

Regarding the 17 December expiry date, UNSMIL and various western governments claim the clock has not started ticking because the agreement has not yet been approved by the House of Representatives. Most Libyans, however, now appear to take the same view as Nayed and Hafter that 17 December marks the end of the LPA and the Presidency Council’s mandate.