LIA gets new Board of Trustees, new board, confirms chairman and reform plan

The Faiez Serraj led Presidency Council/Government of National Accord (PC/GNA) has appointed a new Board of Trustees for the Libyan Investment Authority (LIA) which, in turn, has announced a new LIA Board of Directors and a 6 to 12-month reform programme. At its Tripoli headquarters last Saturday, the new board confirmed the chairman of the previous Steering Committee, Ali Hassan. Hassan, as the new chairman of the LIA.

The new Board of Trustees are:

Saddik Elkaber, Governor of the Tripoli Central Bank of Libya

PC/GNA prime minister-designate Faiez Serraj said: “This is a positive step that reaffirms the LIA as the authoritative and rightful body mandated by the Presidential Council and the GNA, thus endorsed and supported by the United Nations and the International Community’’.

“It provides a pivotal requirement as per the legal framework, Law no. 13, from which the LIA can now continue its crucial work as one institution, delivering capital for Libya’s future generations, and working closely with its subsidiaries to build Libya’s infrastructure and development within vital areas including health, education, and economic diversification.” 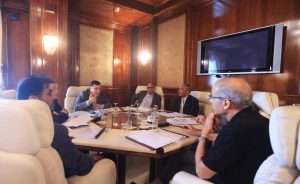 The LIA board will be:

They will all will take up their roles with immediate effect. Abdul Azia will be working closely with NRGI, as head of the Governance Committee to ensure that the LIA improves its adherence with Santiago principles alongside NRGI, the LIA reported.

The LIA stated that Ms. Jana Momaz Regional Associate from NRGI MENA, Project Manager as saying: “This is tremendous news to us as an organisation and we wish to build on the momentum built by this decision to continue to assist the LIA in improving its adherence to the Santiago Principles.”

The LIA also reported that Fabio Scacciavillani, Chief Strategy Officer of the Oman Investment Fund, has been advising the LIA on key governance issues and the application of the Santiago Principles with NRGI. He was quoted as welcoming the developments, and adding that “This development represents a vital step forward, allowing the Libyan authorities, under the aegis of the international community, to effectively manage LIA’s assets in the best interest of the Libyan people’’.

“At such a critical juncture, it is imperative that all parties renew their efforts to grant LIA the necessary autonomy in fulfilling its mandate, while ensuring the highest international governance standards. The recovery of the Libyan economy depends crucially on the efficient use of LIA’s conspicuous resources to attain key economic and social objectives.”

The LIA said that its Board of Trustees working along with the board of directors will ensure mitigation against the current governance risks for Libyans’ Sovereign Wealth Fund, which include risks such as:

It added that the LIA’s funds are currently frozen and secured in accounts in and outside of Libya. Despite the potential for contests arising from Libya’s current political in-fighting, the LIA will administer its responsibilities ‘above the political fray’. Only the newly-appointed Board of Directors will have full control and authority over the assets as part of their focus to deliver LIA’s fiscal, commercial and strategic objectives, the LIA said.