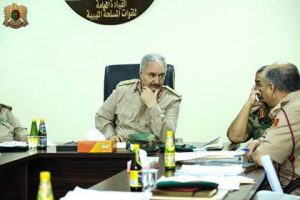 Units of the Libyan National Army led by Khalifa Hafter claim to have moved to within 20 kilometres of Derna, removing earth barriers mounds and cement blocks at Kirissah, west of the Mujahideen-controlled town. They say they have established new positions there, noting that they have been welcomed by local residents.

There has been considerable speculation following the liberation of Benghazi that the LNA (or the Libya Armed Forces as it calls itself) would move to take Derna next, despite the difficulties. On Saturday, the commander of the Omar Mukhtar Operations Room, Brigadier Salim Al-Rafadi, announced that talks were taking place with elders from the town over surrendering it without bloodshed. As a result operations were temporarily being delayed. However, he insisted that one way or another, the army would enter the town. It was also working with the Beida government’s interior ministry to ensure its security one it was taken, as well as the supply of power, medicines, fuel and foodstuffs to the local community.

Meanwhile, Hafter has insisted the battle against terrorism is far from finished, despite the recent liberation of Benghazi.

“Our battle against terrorism is not yet over until it is uprooted from the entire Libyan territory,” he told Russian news agency Sputnik.

Despite ousting Islamist militants from Benghazi, “the road is still long and arduous to achieve our ambitions and reach our goals”, he said.

He added that key oil fields and ports remained under threat from criminal gangs and terrorists. He also insisted his forces would work “day and night” to clear the country of such groups.

He also alluded to the problems faced by unexploded ordinance that litter Benghazi.

“The military engineering teams, despite their limited capabilities, have a serious and arduous task in removing mines and booby traps planted by terrorists on the roads between residential neighbourhoods and inside houses, mosques, schools and public squares,” he said.