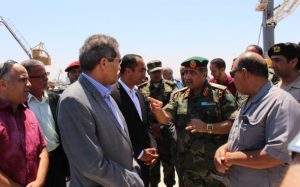 Transport and maritime authorities in Benghazi say they want to reopen the city’s port as soon as possible.

Once the Libyan National Army (LNA) has declared the area safe, the port could be quickly brought back into operation, they agreed in discussions yesterday.

Efforts to reopen it were given a boost on Sunday with a fact-finding visit by Abdul Razzaq Al-Nazhuri, the chief of staff and military governor between Ben Jawad and Derna.

The port was vital to the economy for Benghazi, he said during his visit.  Its closure over the past three years had significantly hampered trade and economy in the city, resulting in a scarcity of goods and high prices. His inspection, he explained, was part efforts to assess the effects of the battle to liberate the city in the port itself and see what needed to be done to fully reopen it.

Adjacent to so much of the fighting that took place over the past three years, the port had been badly damaged, according to its manager, Mustafa Elabbar. But he said that it could be quickly brought back into operation.

Doing so, he said, would also send a strong message to the world that Benghazi was ready and open for business.