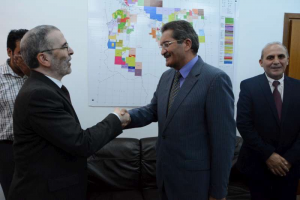 In a busy visit to Benghazi, National Oil Corporation (NOC) chief Mustafa Sanalla said Libya should hit 1.25 million barrels per day (bpd) by the end of the year and 1.5 million bpd by the end of 2018.

He said he also hoped that Libya should reach 2.1 million bpd within the next four or five years.

Sanalla made his predictions during talks with politicians, businessman and oil experts in the city today.

At the headquarters of AGOCO oil company, Sanalla updated Benghazi mayor Abdelrahman Elabbar on his ideas for the city.

He then moved onto to talks with leading businessman and oil men including executives from AGOCO and Waha Oil. They looked at how the private sector could work more closely with NOC including on the repair damaged oil fields and helping increase production.

Sanalla lamented the instability that plagued  Benghazi and the uncertain national finances which had deterred foreign companies from returning and investing in Libya.

The NOC chief’s visit would also appear to be part of his announced consultations throughout the country before he heads to St Petersburg next week to argue with OPEC and non-OPEC oil producers that Libya should not be asked to make voluntary oil output cutbacks, because of the country’s pressing economic and social needs.