Serraj and Hafter agree on ceasefire, elections and Skhirat accord during French talks 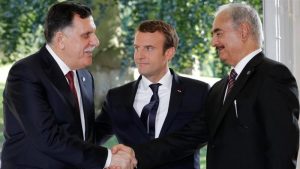 Presidency Council leader Faiez Serraj and Libyan National Army leader Khalifa Hafter have agreed that there has to be a ceasefire and new elections in Libya. The agrement came during their talks today near Paris.

“We commit ourselves to a ceasefire” and “we make a solemn commitment to work for the presidential and parliamentary elections as soon as possible,” Sarraj and Haftar said in a ten-point declaration. – their first such public joint statement. However, in an indication that nothing is cast in stone, the declaration was not signed.

Significantly, in a move that will not be appreciated by several members of the House of Representatives or among some of Hafter’s own advisers, both he and Serraj also agreed that:

Among other points of agreement, they agreed to would work on a roadmap that would see a united military combatting terrorism and dealing with illegal migrant flows, and called on the UN Security Council to support their agreement and the new UN special envoy Ghassan Salamé to undertake consultations to that end with the various key Libyan players.

Salamé took part in the discussions.

In response, French President Emmanuel Macron hailed the “historic courage” of the two men, saying that “today, the cause for peace in Libya made major progress”.

Serraj called it a “great step” towards reconciliation and lasting peace.

So far, despite the unlikelihood of it appealing to certain members of the HoR such as the National Sovereignty Bloc or HoR president Ageela Saleh, the meeting and agreement have drawn initial tentative approval from a number of HoR member and those of the State Council.

Benghazi HoR member Abu Bakr Buera has said that the Paris meeting could create a political momentum in Libya while State Council member Wahid Barshan praised it on the basis that it would lead to fresh elections.

In a sign of dissent, however, the Muslim Brotherhood’s Justice and Construction Party issued a testy statement criticising the meeting, saying that any such gatherings organised by individual countries were a deviation and distortion of the LPA and opened the door to those countries using their influence for their own interests.

Text of the Joint Paris Declaration

In support of the work of the United Nations and in the context of implementing the Skhirat agreements, taking into account the initiatives of the international organisations involved with Libya, in particular the African Union, the European Union, the League of Arab States, while highlighting the efforts made by friendly countries and partners of Libya in recent months, in particular Egypt, Algeria, the United Arab Emirates, Morocco, Tunisia and Italy;

This initiative comes in full support of the mission of the new Special Representative of the Secretary-General of the United Nations, Ghassan Salamé, who participated in the exchanges on 25 July. The objective of France is to contribute to the development of a political solution and to help the Libyans to strengthen the inter-Libyan political agreement of Skhirat so as to make it more effective and inclusive.

The meeting at La Celle Saint-Cloud is a continuation of the meetings that have already taken place at different levels, in Abu Dhabi, Cairo, Algeria, and takes up those elements that have been agreed. It aims at the continuation of an inclusive and supported inter-Libyan dialogue in which all actors of good will have their place.

In this context, the following statement was adopted by the Libyan parties present:

“We, Faiez Sarraj, President of the Presidential Council of Libya, and Khalifa Hafter, Commander of the Libyan National Army, met at Celle Saint-Cloud on 25 July 2017 at the invitation of the President of the Republic and In the presence of Mr Ghassan Salamé, Special Representative of the Secretary-General of the United Nations for Libya, in order to advance the cause of national reconciliation and we have agreed as follows: