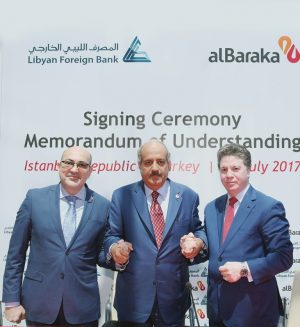 Leading Bahrain-based Islamic banking group Al-Baraka Banking Group (ABG) have signed a Memorandum of Understanding (MoU) with the Libyan Foreign Bank (LFB) to develop their banking relations across the board.

“The MoU aims to establish a close cooperation framework through which the two parties can activate joint initiatives and banking activities, as well as prepare technical cooperation programs in the future,” ABG has said.

The MoU will include the exchange of information, which in the case of the LFB should benefit it in the field of Islamic banking. It is also hoped it will enhance cooperation in correspondent banking and commercial finance operations between the two who have identified each other as “preferred trading partners.” Additionally, the MoU will work towards further cooperation in liquidity management, investment and taking advantage of the network of resources available to each party.

“Al Baraka has historical and strong relations with the Libyan banks and the Libyan market, especially the Libyan Foreign Bank, which plays a leading role in Libya, Africa, Asia, Europe and America and owns main participations in 40 banking and financial institutions in all these countries…It is natural to look forward to working with the Libyan Foreign Bank to integrate our large resources and potentials in all forms and fields of banking to achieve mutual benefit and to improve the integrated work models among the Arab banking institutions,” said Adnan Ahmed Yousif.