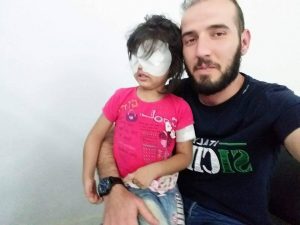 Purported photo of the injured child

A mother and her two daughters suffered injuries to their eyes, face and body when the debris from a landmine explosion hit them in Benghazi’s Busnaib area.

One of the daughters was particularly badly affected and is in the intensive care unit of Al-Jalaa hospital. Doctors removed shrapnel from her face, torso and left hand. However, they described her condition as stable and said the child would retain her sight.

The other sister and mother were treated for minor injuries before being discharged, doctors said. All survived because they were relatively far from the landmine when it went off, they added.

With Benghazi supposedly liberated, attention has now turned to demining the city, which is littered with unexploded ordinance left by militants. At least five civilians are injured or killed a day, with Libyan National Army (LNA) soldiers also badly hit.

Meanwhile, the city’s disease control centre is claiming that the city is free of potentially epidemic diseases, having tested samples from different areas. However, it did not specify for which diseases tests had been carried out.