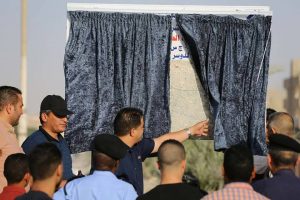 In a move showing that lie is back to normal in Ajdabiya, there was a ceremony on Thursday event to mark the launch of resurfacing the town’s western ring road. Plans were also announced to resurface the southern ring road.

The latter is seen as particularly important. The road, which is in fact in the east of the town, has the major intersections with the roads to Torbuk and, 2.6 kilometres further south, to Jalu.

The projects are being carried out by Al-Dosser Construction and Engineering.

Thursday’s launch ceremony was attended by the acting mayor, Colonel Saad Akouki, his deputy Attiyah Abdulmajid Kassah, as well as other as well as officers, security officials and local dignitaries.