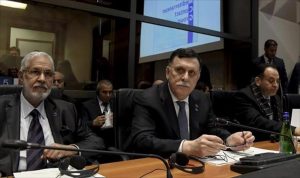 Presidency Council (PC) head Faiez Serraj has been contradicted by his foreign minister Mohamed Siala who says his chief did indeed invite Italian premier Paolo Gentiloni to send his country’s warships to help Libya in the fight against people-traffickers. Serraj has denied any such invitation.

Siala, who was with Serraj at the Rome meeting on Wednesday, has insisted that a deal was reached to allow Italian ships into Libyan waters with the permission of the PC.

A statement put out by the foreign ministry, signed by Siala, said that the PC request was for “logistical, technical and operational support to the Libyan coast guard.” It went on to say: “These measures require the presence of some elements of the Italian Navy at the port of Tripoli, but only for this purpose and only if necessary”.

Siala’s assertion flies in the face of denials by Serraj, who said on Thursday that he had only asked the Italians for more training and support for the Libyan coastguard.

Serraj warned that Libya’s sovereignty could not be compromised and that having foreign warships in Libyan waters was a red line that could not be crossed.

Gentiloni has if anything muddied the waters further. After meeting Serraj on Wednesday he said quite clearly that Italy had been invited to send warships. However, following a cabinet meeting in Rome on Friday, he appeared to be choosing his words carefully. He is reported to have said: “The cabinet approved what the (Libyan) government requested, no more, no less.”

There have been unconfirmed reports in the Italian media that Gentiloni is considering deploying six naval vessels including a command ship and up to 1,000 marines as well as manned aircraft and drones.