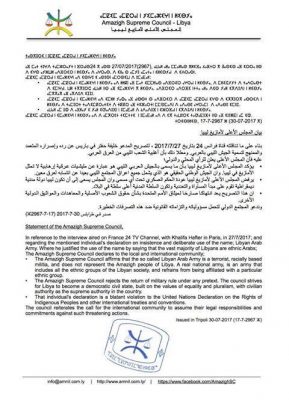 Describing it as the “so-called Libyan Arab Army,” the ASC insisted Hafter’s forces did not represent the Amazigh people.

“A real national army is an army that includes all the ethnic groups of the Libyan society, and refrains from being affiliated with a particular ethnic group,” a statement said.

The ASC statement said it was made in response to comments Hafter made to France 24 TV that the vast majority of Libyans were ethnic Arabs.

They described Hafter’s comments as a “blatant violation” of international conventions and called on the world “to assume their legal responsibilities and commitments against such threatening actions”.

It continued: “The Amazigh Supreme Council rejects the return of military rule under any pretext. The council strives for Libya to become a democratic civil state, built on the value of equality and pluralism, with civilian authority as the supreme authority in the country,” the statement added.

Hafter is a firm supporter of a strongly centralised state had has no time for those who want federalism or even decentralisation.

His latest comments and the ASC’s response widen the already deep divide between the two. Earlier this month, the ASC condemned a fatwa from the eastern Islamic affairs authority describing Ibadi Muslims as infidels.

Most Libyan Amazigh are Ibadi and the ASC accused the authority of inciting genocide against them. The Thinni administration has since taken the side of the fatwa authority, claiming that it was moderate and had not mentioned the Amazigh by name.