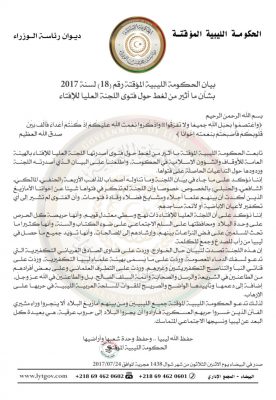 The Beida-based government has sided with its Awqaf (religious endowments) and Islamic Affairs Authority in the row over the latter’s fatwa damning Ibadis as infidels. It has claimed that the committee is moderate, keen on social peace and keeping Libya united.

Last month the authority has issued an edict describing Ibadi Muslims as infidels and “Kharjites” despite the fact that a large proportion of Libya’s Amazigh community are Ibadis.

The edict has produced a massive outcry , both from the Amazigh and the non-Amazigh communities in the country. Last week, the Presidency Council joined in the condemnation.

Ignoring the link between the Amazigh and the Ibadi form of Islam and indicating surprise at the outcry, the Beida government said there had been no mention of the Amazigh in the edict. It called on all Libyans, including the Amazigh, to remain calm and collected, and not allow themselves to be drawn into any conflict as a result of the it.

The interim government’s response follows a similar statement from the Awqaf authority’s fatwa committee a couple of days ago, in which it similarly tried to exculpate itself in the row by likewise stressing that there had been no mention of the Amazigh.

Neither statement, however, is likely to end the matter.