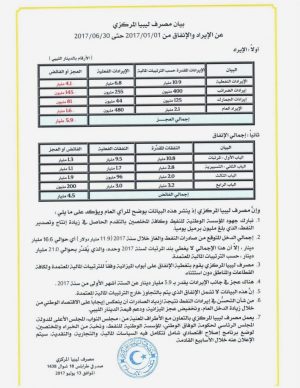 The Tripoli Central Bank of Libya released the latest financial statement today for the second quarter of 2017 revealing the country’s state of affairs. The figures continue to reveal a state budget deficit with the deficit for the six months to 30 June coming at LD 5.9 bn. The CBL said that it will be announcing a reform package.

Oil revenues for the same period brought in revenues of only LD 6.8 bn as opposed to the forecast LD 10.9 bn, the overall deficit was no surprise. All other tax revenues came in under estimates. The only silver lining is that because revenues were under budget estimates, spending was also 4.5 bn below budget forecast.

The CBL congratulated the NOC for increasing oil production and exports to over a million bpd. It estimated that total forecasts for oil revenue for the whole of 2017 would be US$ 11.9 bn (LD 16.6) which it pointed out would not cover the annual state-sector wage bill estimated at LD 21 bn.

It also expected that as a result of increased oil production there will be an improvement of state revenues, a decrease in the budget deficit and an improvement in the LD exchange rate.

Finally, it revealed that it will be announcing in the coming weeks a comprehensive economic reform programme it was working on through which financial, commercial and monetary policies will complement each other.

*Budget is the Temporary Financial Arrangements as per Libyan Political Agreement

US ambassador meets Hafter in Amman