NOC not accepting its CSR over ‘‘death road’’: Brega Municipality

The Brega Municipality Council has sent a letter to NOC chairman Mustafa Sanalla calling on the NOC to ‘‘conduct its business responsibly and ethically’’ in the region.

The letter was complaining about the rising death toll on the main single lane rundown road referred to as ‘‘Death Road’’ by locals linking Jalu-Ajdabiya-Brega. The road, which this writer has travelled on from Jalu to Benghazi, is heavily used by all the Libyan and foreign oil companies in the region. Locals complained to this writer then and locals still complain that the road has been in a poor state for 50 years.

Locals complain that the road is paid for by local tax payers for ordinary use and not heavy industrial use that NOC related companies are putting it through. The road is heavily used by ‘‘crisscrossing’’ oil industry’s trucks, vans, rigs eroding its surface quickly and making it dangerous to drive on. The letter to Sanalla says that ‘‘between NOC companies, terminals and facilities, between 4 oil and gas ports, 3 airports and two heavily utilized ports’’, the road suffers great use.

It adds that ‘‘Two weeks ago there were 10 deaths and 13 seriously injured in 8 road accidents on what is known as ‘’Death Road’’. The letter says that records show that in the last two years there have been 104 deaths and 308 severely injured citizens in accidents on these roads’’

The letter calls on the NOC ‘‘to conduct its business responsibly and ethically and to think about the lives of the people who are suffering and losing their loved ones on these roads everyday’’.

The letter calls for action and an urgent written response from the NOC. 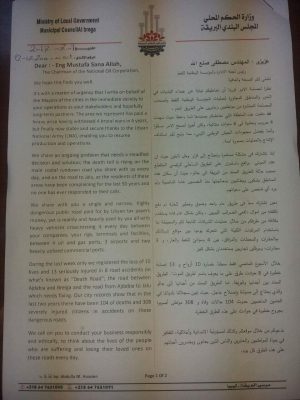 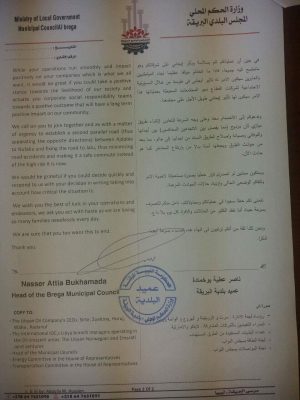 Zeidan denies disunity allegations attributed to him after Sebha visit