Pro-Qaddafi football star welcomed back to Tripoli by Haithem Tajouri 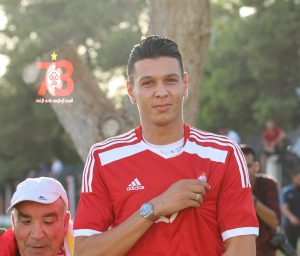 Tripoli footballer Mohamed Zubya has returned to Tripoli after six years’ of exile, in large part due to the involvement of militia leader Hathem Tajouri.

The capital’s Al-Ittihad team has announced on its Facebook page that Zubya will be rejoining the club after prematurely ending his contract with Tunis’ Esperance Sportive.

A supporter of the former Qaddafi regime, Zubya left the country in 2011, first playing for Kuwait’s Al-Arabi club, then being signed up the following year by Belgrade’s FK Partizan. In 2013, he moved to Algeria’s top league club JS Kabylie based in Tizi Ouzou. He then joined Esperance in 2016 but complained of constantly being put on the substitutes’ bench or even left to watch matches from the stand. He was known to want to return to Libya, but his contract with the Tunisian team and his political views worked against him.

However, he has a devoted following in Tripoli and it is reported that Tajouri took up his cause, persuading the Tunisians to let him go. How he did so has not been disclosed.